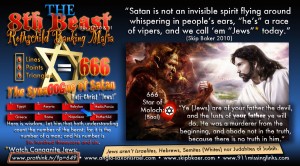 Watch Canaanite Jews & “The Star of David” is “The Mark of The Beast”: www.prothink.tv/?cat=16

“Sem” is the Greek for “Shem” Noah’s son, who like Noah was White. A Semite is just a White Person as Noah was “perfect in his generations (ancestry)” from Adam, and the name “Adam” means: “to show blood in the face,” or a White Person, in other words. Jews are NOT Semites, nor Israelites, nor are they Hebrews, or Judahites, (they are lying about all four things). Anti-Christ, Edomite, Canaanite Jews are pretending to be us real Semites/Israelites, the Anglo-Saxons, and White peoples of Europe who left Israel in 745 B.C. to found Abraham’s “Many Nations” in the wilderness of Europe, promised by God. “7 Times” (2,520 years) after we left Israel in 745 BC comes to 1776, when we founded the New JerUSAlem.

This site uses Akismet to reduce spam. Learn how your comment data is processed.